The "Cover Story" of the issue n 9 is perhaps one of the most interesting, special and unique that we never published. Each offroaders know certainly the British company Gigglepin, producer of the famous twin-engined winches, and its owner Jim Marsden. We realized an exclusive interview with Jim Marsden that we propose here in the original version.

Jim Marsden after he became famous for his winch, it also became famous for its sporting successes in the world of offroad that led him to run in the most important races in Europe and USA. His sport background is full of excellent results and everybody knows his successes. The history of him is very interesting but perhaps less known. I know very well Jim, I follow him for many years on the race. In the number 9 of OFFROAD Lifestyle I decided to do something different, I interviewed him to know him better. From this article, the best thing that comes out is his passion for offroad and understand that is a real lifestyle.

While Jim Marsden is preparing for the 2016 race season, I am writing this interview, which allowed me to discover some aspects of him that I did not know.

After a few pleasantries and after briefly talked about races which will follow to see if our calendars could match, I went directly to the point:

When and why you start with offroad?

I first started offroading as a boy aged 15 on the farms of southern England, driving tractors and quad bikes, but could never get enough driving to fuel my thirst. Surprisingly I did not pass my driving test until I was 20 and the first thing I did was buy a 1969 S11A Landrover. It was in a sorry state and the gearbox exploded on the way home. Two years later I bought a Landrover 90 and started travelling to offroad days with my friends. It was great fun, we had little money and we worked hard for every upgrade we had. Back then a set off mud tyres was king and a winch was a luxury item well above my meagre budget. It was in those Kent and Sussex woodlands that I learned about traction or more importantly, the lack of it and that gravity sucks!

When and why you start with your winch company and with the race?

In 1997 my boss moved to Wales and I had a stark choice, move to Wales or find another job. I tried living in Wales and it was great fun, but my girlfriend and family were in Kent and after 4 months I was back home in England. It was then I decided to go for it and start my own company repairing Landrover’s. In October 1997 Gigglepin 4x4 opened its doors for the first time. It was a tough time, but my friends and family were great and I worked hard. Two years later I expanded to larger premises and employed my first mechanic. It was a good time, I lived and breathed Landrover’s.

Then in 2000 I travelled to Sweden with two friends to take part in the Swedish offroad tour. With a Landrover loaded with beer and a couple of tents, we set off for adventure. Over the next 10 days we meet some cool people that would have a profound effect on me. I had caught the travel and offroad bug and I was hooked. I came back from Sweden and sold my then dream car, a 3 year old Defender 90 300 and bought a 200TDI Defender 90 SV; it had a roll cage and winch which made it perfect for my new found enthusiasm.

In September of 2000 I entered my first event, the Belgium National. With five vehicles, two from Hungary, two from the UK and one from Holland, it was a truly international team and we went on to win the XXtrem category and the Team spirit award.

On returning home I set about modifying my SV Defender and started racing, I was totally immersed. I worked hard to find every advantage, using skill and invention as money was tight. Then in 2003 I broke my Warn 8274 winch while defending my Tough Trucks title. I was devastated and vowed to repair the winch, make it stronger and more powerful. At that time I had no idea that it would lead to Gigglepin growing to be a global brand and market leader.

And in your free time? What you do?

I’m a lucky guy and my work and free time mix together. Most of my friend’s race and spending time with them and my family are my relaxation. If I’m very lucky maybe we’ll go down to the river, go fishing or boating, but I’m happiest with family and friends.

What is the best race you did?

Offroad racing is not about a single race, it’s about a lifestyle, it’s about the people you meet and the experiences you share. There have been so many amazing experiences, winning Breslau, Crossing the line first at the Everyman Challenge at King of the Hammers, Racing the Norra 1000, the list goes on and on. To pick one race is really tough; I have raced so many that events that are special to me and have won over 40 titles. But if I was put on the spot and had to choose one, it would be the Croatia Trophy 2011. My fascination with this event started in 1997 when I read an article about this events predecessor “The super Transylvania”. I read that article a thousand times and at that time could only dream about being able enter such an event and never could have believed one day I would win it. In February 2011 we started building  a new car and completed it in only 11 weeks (an amazing feat in itself), then travelled to Croatia after only a day of testing. This year Australian Legend Wayne Smith flew over to co drive. We had never met before and only spoken on the phone a few times. Wayne is previous winner of the Malaysian Rainforest challenge and Outback challenge Australia, but we had no idea if we would get on or could work together? 2011 was a classic year in Croatia with over 130 teams spread across two classes it was never going to be easy. Luckily Wayne and I clicked straight away. But disaster struck before we left the UK as we had to change to another set of wheels and tyres after our new wheels started leaking. We were heading to the toughest event in Europe with 33” tyres. The game just got even tougher! The prologue went well for us and we started well up the order on day one. But disaster struck again 4 km into stage 1 when a battery failed. We lost over 45minutes fixing the problem and getting back underway. Only a few kilometres down the track and we came to a moment that would change our trophy. The track was destroyed and we could see many cars had been driving in circles having lost the route. Wayne assessed the route and calmly asked me to drive over a large fallen Beech tree. I thought he was crazy, but as I passed over this enormous tree the route opened up in front of us. To our surprise we were the first car to find the route as the other 100+ vehicles were still going the wrong way! It was a pivotal point and we finished day one with a staggering one hour lead. The next 3 days went to plan, but day 4 we had problems when a fuel line disintegrated costing us our advantage and narrowing our lead to only a few precious minutes. The following day we started well down the starting order in about 15th position. The first few tulips were not easy and we went back to the start twice to double check. Wayne once again nailed the navigation and for the second time on the event we turned a tough call to our advantage as other teams failed to find the correct route.  We then turned on the style over the final days, eventually winning by 4.5 hours and also winning the outstanding achievement award. It was a very special moment in our lives. 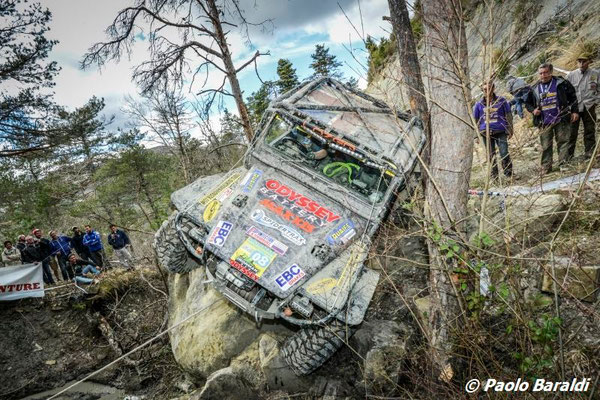 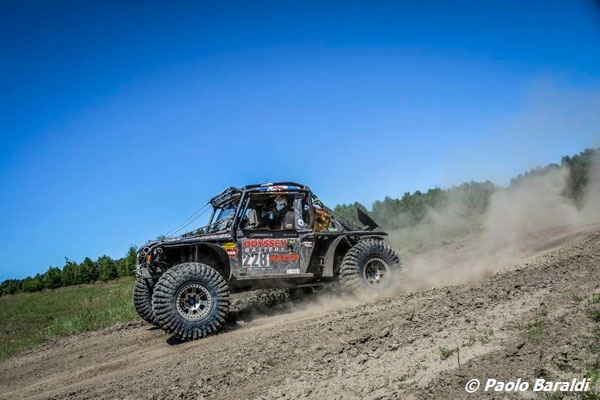 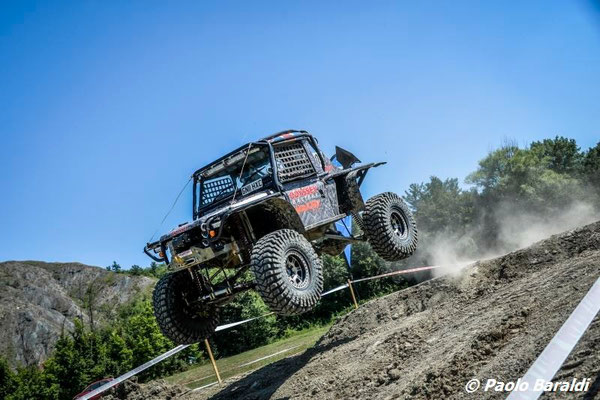 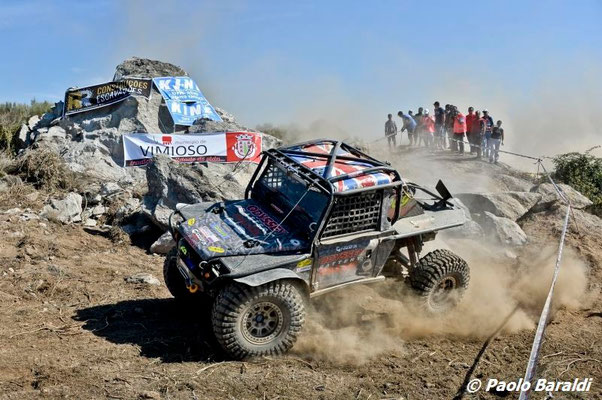 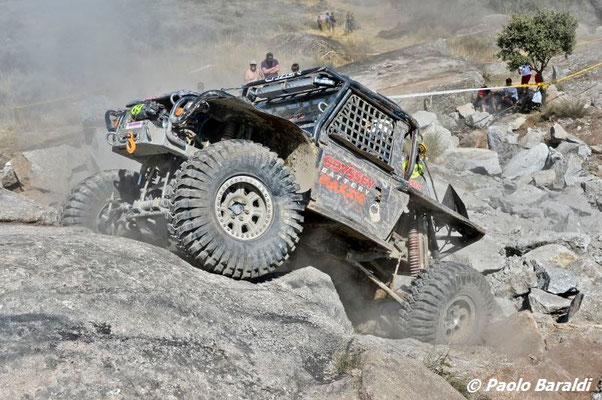 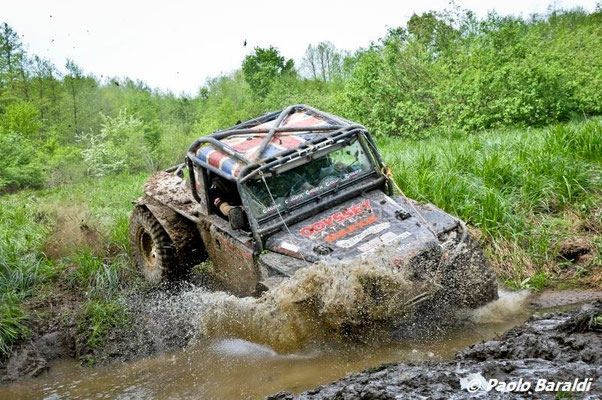 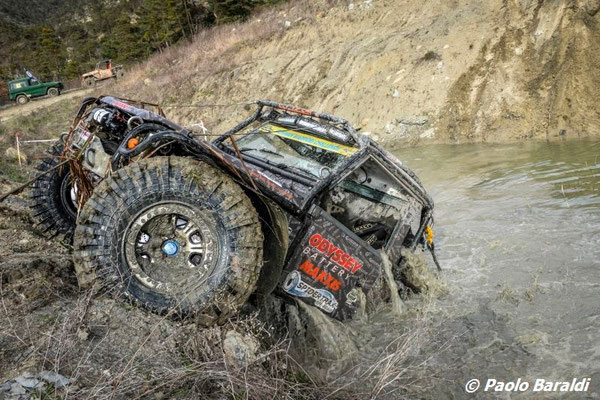 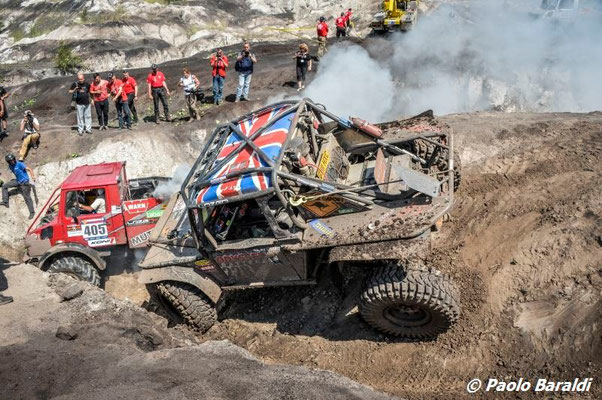 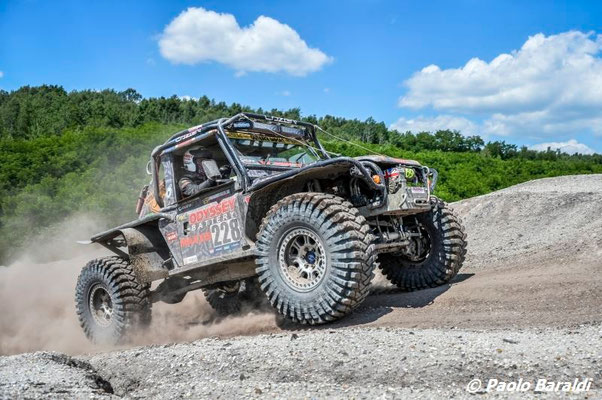 Tell me something about your emotion in the offroad world?

Racing is my life. What started as a bit of fun has grown into a full time occupation that takes me to incredible places and allows me to meet amazing people. There are times when you laugh so much you cry and times when you give so much you cry. It’s impossible to describe to those that don’t race how much it means and yet you only have to catch the eye of those you race to know if they understand. It’s that knowing smile, a wink or a nod of the head. It’s a mutual respect and a shared passion. What we do is dangerous and that makes those friendships even stronger. The best bit about racing is meeting people from so many different countries, the traditions mix and everyone wants you to share their culture, their foods and their drink! There have been some very heavy nights “tasting” local specialties, but I’m not a heavy drinker and can usually found asleep by the fire long before midnight.

What it is the most difficult race that you did?

There are many different elements to this question. The title of the most difficult Xtrem event  has to be shared by the French Xtrem 2015, Andorra Xtrem 2012 and the Portugal Xtrem 2013 all them totally nuts with wildly insane sections. The most difficult trophy raid is shared by the Croatia Trophy and the Breslau Rallye. Racing over 7 days and 8 stages takes a lot of hard work while trying to keep your car alive. But the most demanding has to be King of the Hammers. The event chews you up and spits you out. It’s a brutal near 200 mile car crash that is unrelenting and unforgiving. It kills great cars and breaks the best crews and I’m proud to say I’m one of the few from outside the USA to have completed the course.

Tell me about your 2017 race plane

2017 is going to be a big year, there is a lot changing with many new Ultra4 style cars hitting the scene and many more new teams appearing. We are changing and evolving too, 2017 will see us with a new car. Last time we built a Trophy raid car that could compete at Ultra 4 and this time we are build an Ultra4 car that can race Trophy raid. We have the best team in the business from co drivers, to mechanics, to photographers, to cooks, to drivers and on.  We will also be attending a lot of shows and promoting the Offroad world to a larger audience. It’s a fantastic sport that is growing and I’m right in the middle riding the wave and hoping it doesn’t stop any time soon.

Finally Jim, what is your thought about our sport?

I still feel young and hungry for excitement, and I’m always looking for that next adventure and another fresh challenge. The great thing about our sport is that we have some many different events that interlink and the skill for me is to build a vehicle that is at home in Croatia as it is in Scotland, Portugal, France or even Australia. I would really like to race the Portuguese National championship races. They have some great cars, talented drivers and wonderful supporters, so that is something to aim for. I would also like to race in Australia so let’s see what happens in the future. One thing is certain, it won’t be dull and I wont be stopping anytime soon.