Created in 2015 by the Jeepers Club Milano to celebrate the 40th anniversary of CJ Levi's Edition, this Jeep Hot Rod has quickly become a must in all of Europe and has become an icon of all the Jeep brand and American car culture fans.

Pictures and text by Paolo Baraldi

Jeep, Jeans and Hot Road what will they have in common? Yes they are born in the United States of America, but there is much more than you can not imagine and to understand it better it is useful to make a digression for analyzing the history of these objects separately.

The first one is jeans and more precisely Levi's. In 1872 Jacob Davis, a tailor from Reno, Nevada, joined the Bavarian Levi Strauss, who moved during the gold fever in San Francisco to open a store that sold clothing, shoes and other goods to small stores in West America. Strauss create a line of work clothing reinforced with copper rivets and made of jeans. The first to wear the legendary trousers were the gold diggers; gradually it spread, passing to the farmers to become part of the way of dressing of the cowboys. Making the Levi's famous and captivating crowds of fans are the myths of the cinema of the '60s and' 70s. From James Dean, to Marlon Brando and then to the hippies, who make their own uniform using it as a symbol of rebellion against bourgeois conventions and institutions. Adopted by the rebellious generation of bad boys, the young people's favorite look becomes the black leather jacket, the white T-shirt and the legendary Levis 501 jeans. Just in this period the five-pocket trousers, which until then had been dedicated to workers, becomes a piece of clothing that worn by young people and not only and was associated with leisure time. From America, to Europe and to the whole world, the step was short and the spread of jeans becomes global and becomes, especially for the Eastern countries oppressed by communism, a symbol of freedom and emancipation.

The second interpreter of our story is Jeep. The name Jeep derives from the acronym of the military General Purpose Vehicle used for the Willys. The pronunciation and slang by the Americans led precisely to coin the term Jeep. Willys-Overland, which produced the famous MB during World War II, began using the Jeep name for the civilian version of the MB, namely CJ: Civilian Jeep. Subsequently, the brand has undergone several changes of ownership, up to the most recent with Fiat or better with FCA, but has never lost its inclination to be synonymous of adventure, fun and freedom that, from CJ to Wrangler through all the various models, all Jeep vehicles have always represented.

In 1975, and until 1986, these two legendary stars and stripes myths come together, and here our story begins to make sense, to give life to a special edition of the Jeep CJ. The Levi's package, one of the most popular options that Jeep had ever offered as an option on all CJ and as a standard on the Renagade, included all the interiors and the soft top with material and stitching that reproduced the Levi's. 2015 was the 40th anniversary of the first CJ Levi's Edition and the boys of Jeepers Club Milano, led by Bruno Tinelli, have decided to celebrate this important anniversary during the Jeepers Meeting in Maggiora (Italy). It is now a consolidated tradition that every edition of the meeting has a theme represented by a special vehicle. The JM show-car 2015, whose work began on 18 August 2014 and ended on 20 June 2015, should have left everyone bewildered, attracting general attention, astounding anyone, and then redirecting the attention to the Jeep brand and its important history. To achieve this goal as a better, the idea was to refer to another important "cult" of American car culture; the choice could not therefore fall on a Hot Rod.

Since the '30s Hot Rods, which most likely take this name from the operation of replacing the connecting rods to improve engine performance, starting from California know an ever greater spread and even today these vehicles, made by modifying radically old cars, knows a great appreciation all over the world.

The Hot Rod Levi's Edition of Jeepers Club Milano was created starting from a CJ 6 of the mid-60s, then modified to adapt it to the Hot Rod style without losing the characteristic elements of a Jeep and a CJ. The classic front grille, the typical body lines, the big off-road tires and a powerful V8 have been maintained. The interior could only be Levi's! It's incredible, and that's what we like the most is that Bruno Tinelli and his guys of Jeepers Club Milano, have managed to bring together and summarize years of the history of American culture with the construction of a single vehicle. All this goes beyond passion and goes beyond knowledge; it means having this lifestyle in your DNA so that you can combine every aspect of it in a material object that is worth much more than a thousand words and much more than a book on American culture. 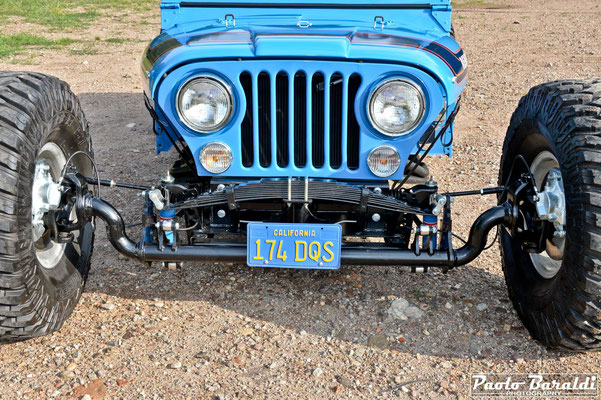 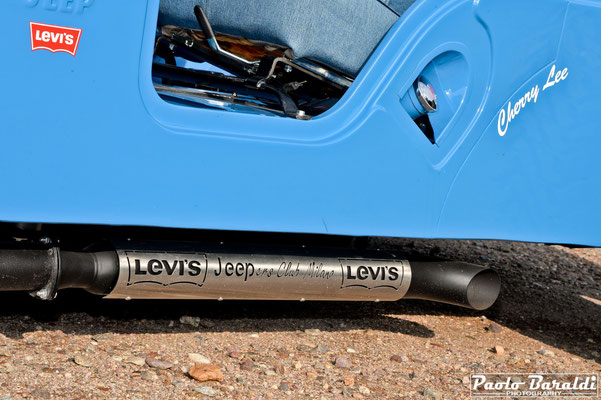 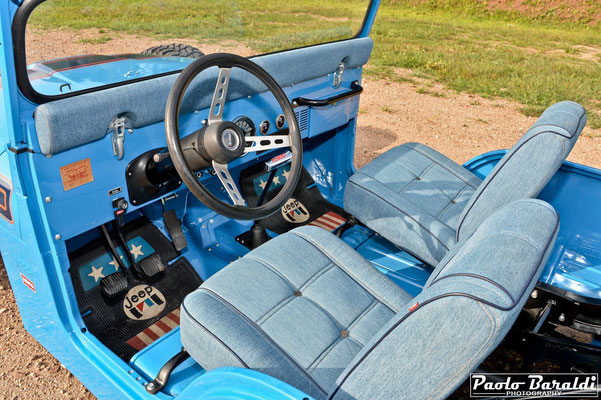 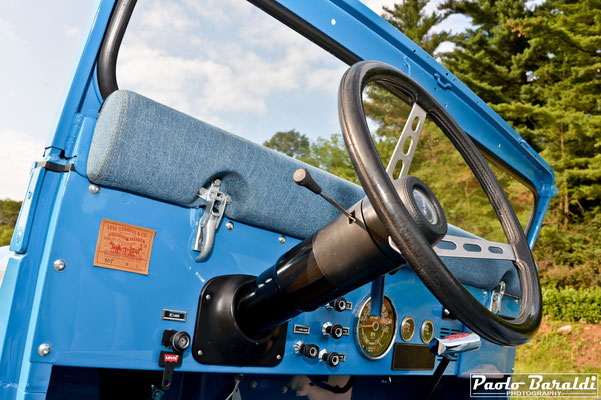 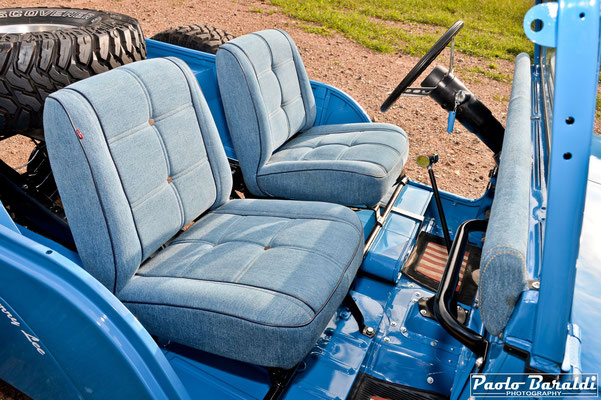 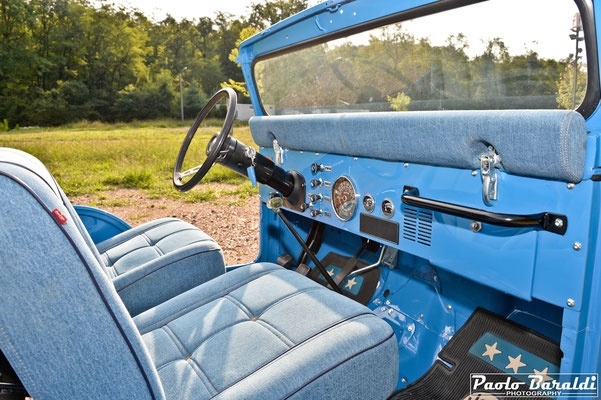 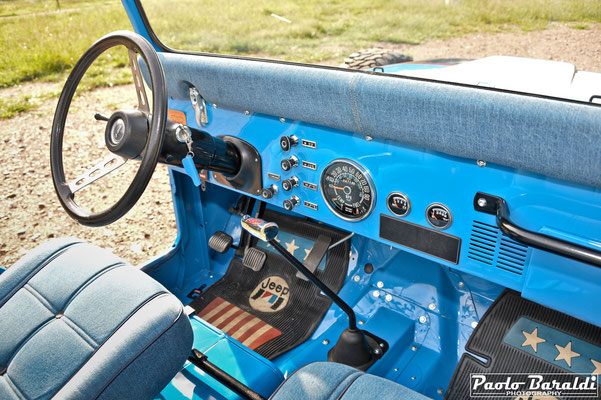 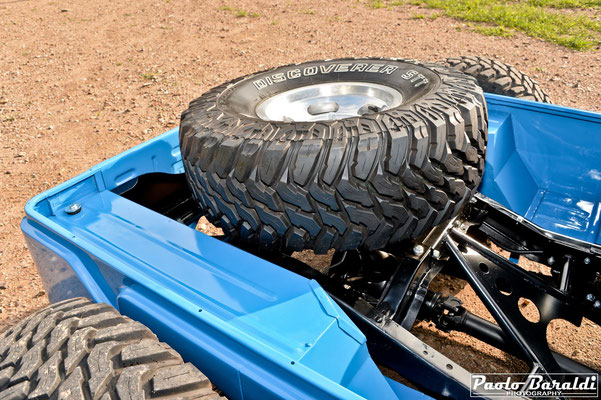 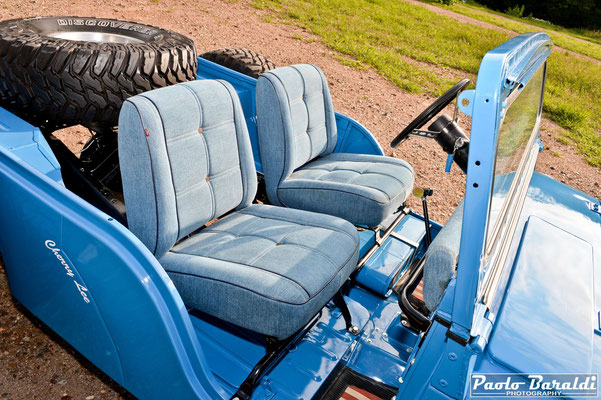 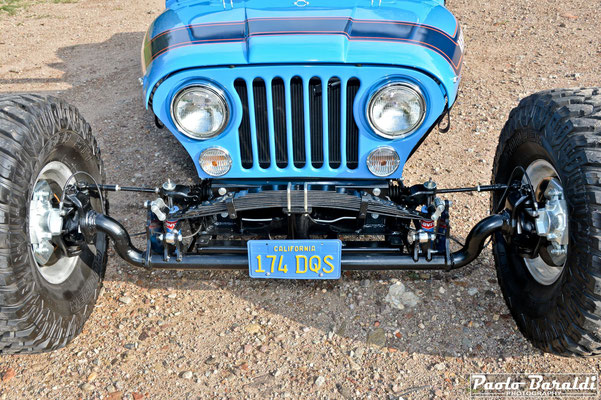 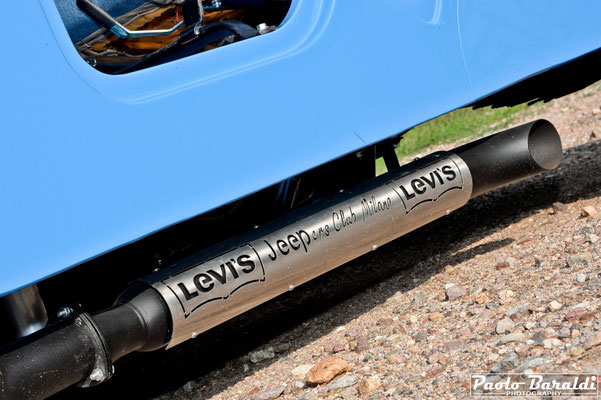 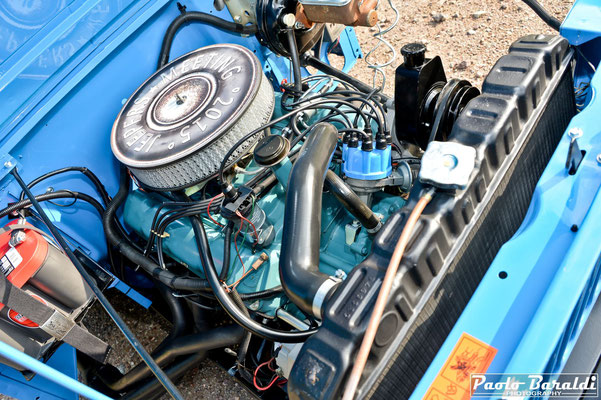 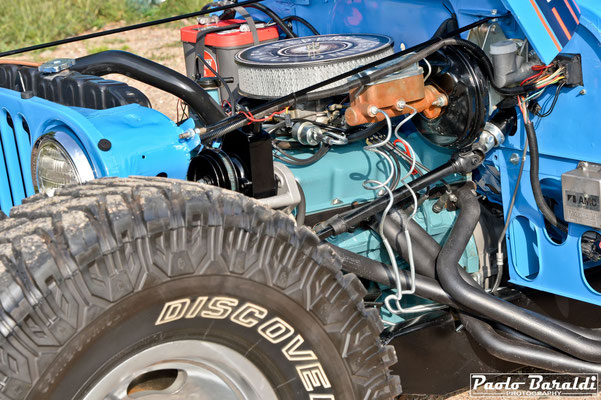 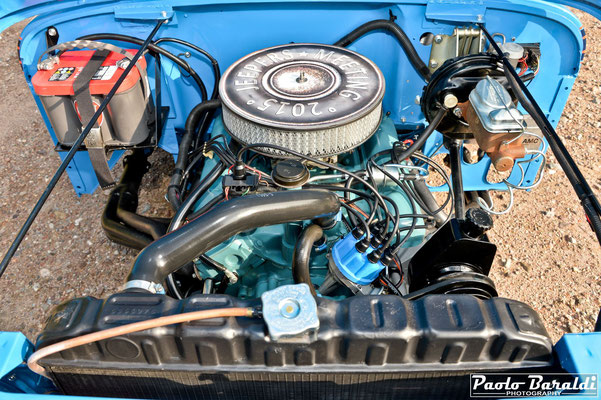 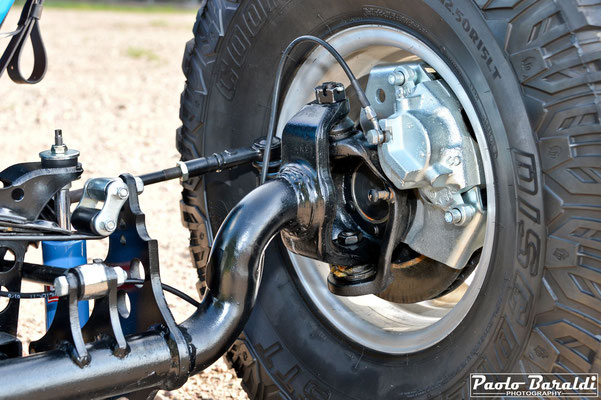 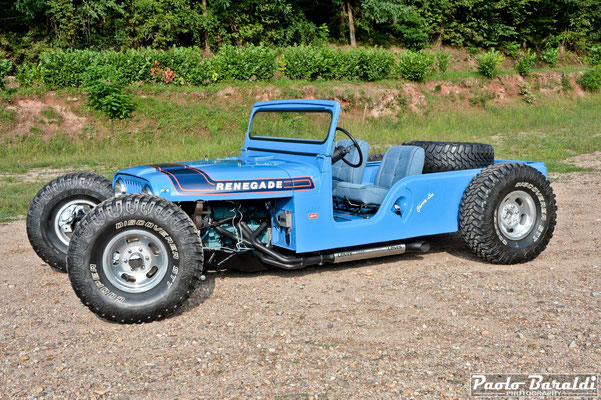 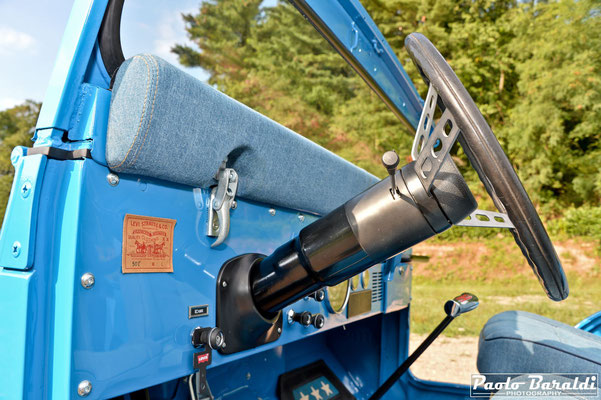 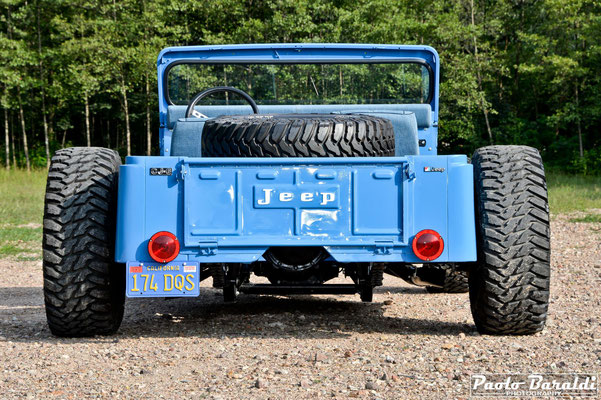 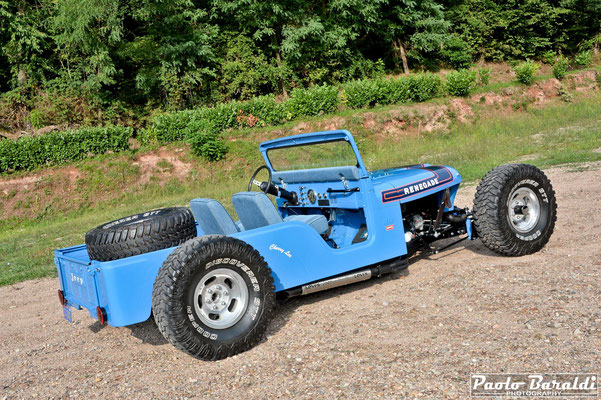 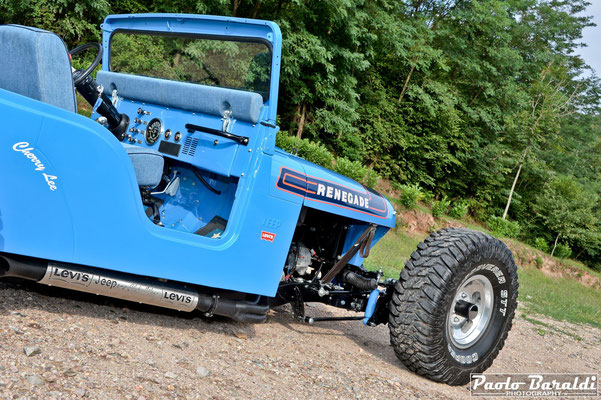 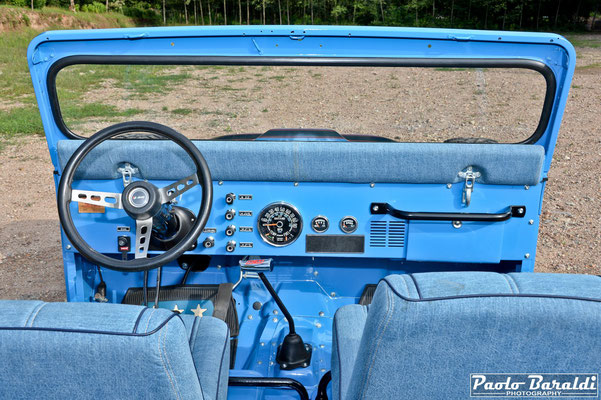