The new Jeep pick up Gladiator

Exactly one year after the American launch of the Wrangler JL, Jeep presented the long-awaited pick-up at the Los Angeles Auto Show. After 26 years since the last Jeep pickup, the Gladiator represents a new frontier for the legendary brand with characteristics of performance, aesthetics, loading and towing among the best in its class.

Initially available for the US market, the Gladiator will be powered by a Pentastar V6 petrol with 285hp and 352Nm of torque with a six-speed manual transmission or eight-speed automatic transmission. In 2020 will be offered also the option of Ecodiesel V6 3.0 with 260hp and 600Nm with automatic transmission eight speeds. In Europe it will be marketed in 2020.

The Jeep Gladiator 2019 will be available in 4 versions: Sport, Sport S, Overland and Rubicon.

The project derives from that of the Wrangler but with many parts and components unique to the JT and therefore aims to offer technical content in line with the brand's off-road tradition: all-wheel drive, Dana 44 axles evolved with Tru-Lock system with electronic control, self-locking differential Trac-Lok, detachable anti-roll bars and four-wheel drive. The Jeep Gladiator can top out for 76 centimeters and offers two types of four-wheel drive depending on the set-up: the Command Trac variant on the Sport and Overland models and the Rock-Trac on the Rubicon. For all, the Trail Rated certification can not be missing, destined only for versions with greater off-road capability.

The wheelbase is stretched up to 3.49 meters with a load compartment of 152 cm. The frame is longer than 78 cm. The payload is 725 kg, while the maximum towable load is 3,470 kg. The Trail Rail system is available in the body to organize the load and the three-panel hard top kit is provided. 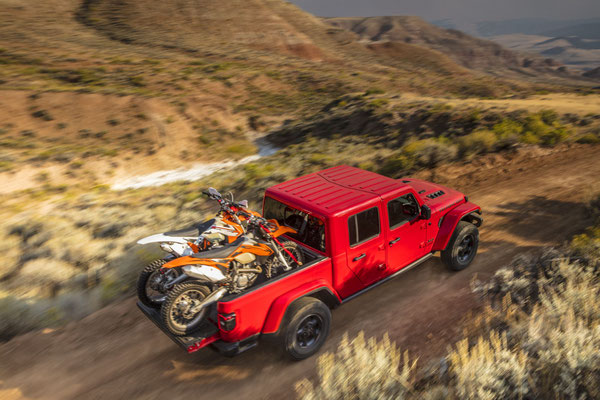 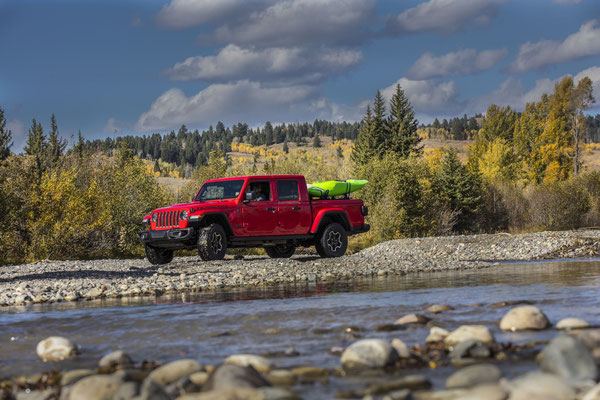 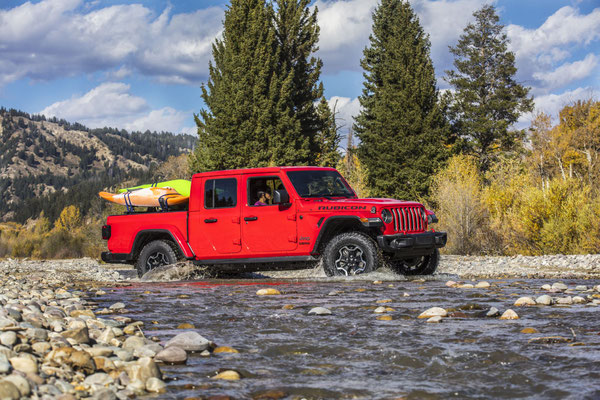 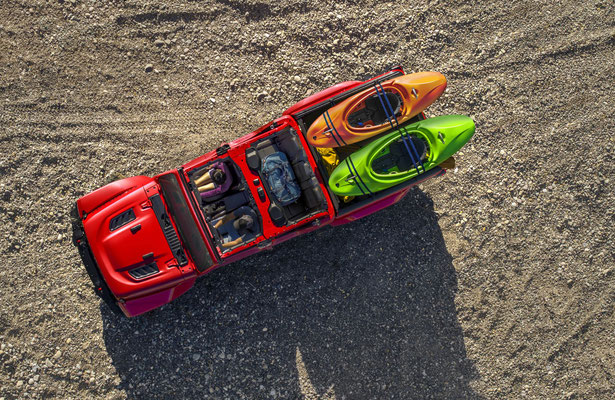 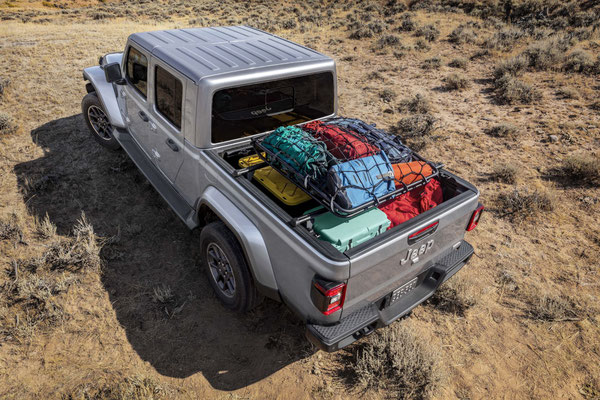 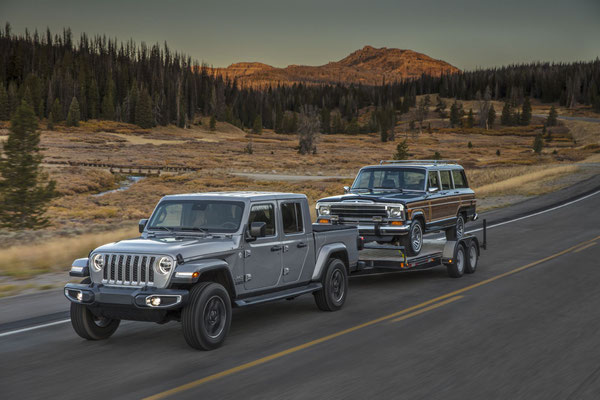 The Jeep Gladiator Rubicon also maintains a unique feature in the segment: in fact, it allows to tilt the windshield on the front bonnet, remove the doors and open the Sunrider canvas roof.

The interiors replicate those of the Wrangler JL. In the rear area you can lift the sofa to access a further storage compartment with removable dividers and lock, so as to provide a safe space even when the car is used with the roof open and doors removed. The instrumentation integrates a 3.5 "or 7" display, while the infotainment offers screens from 5 "to 8.4" depending on the equipment. For the Rubicon model the front camera is projected which projects images on the central touch screen, allowing the driver to detect any off-road obstacles in advance. 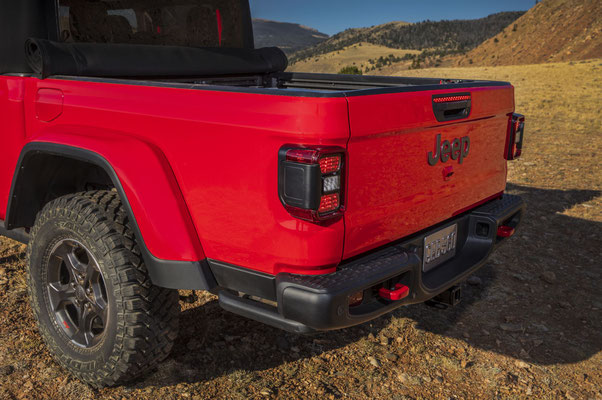 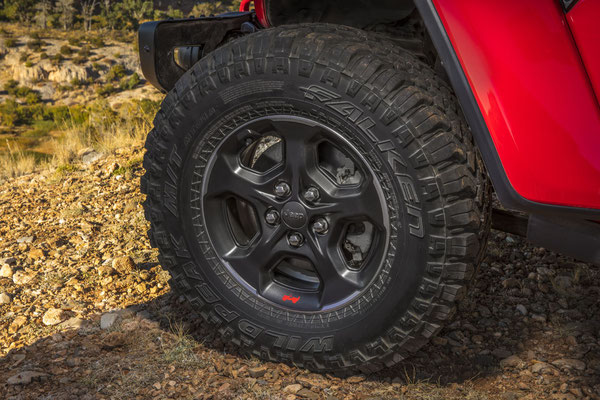 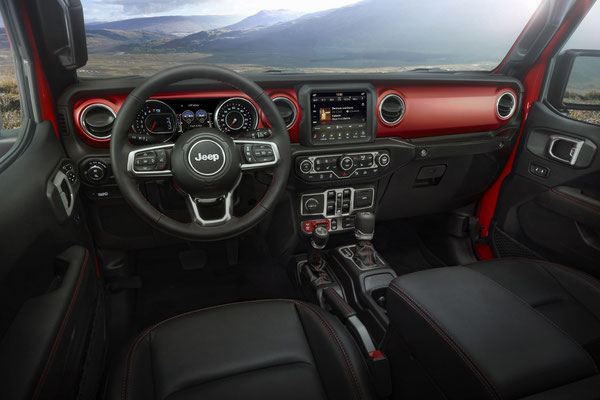 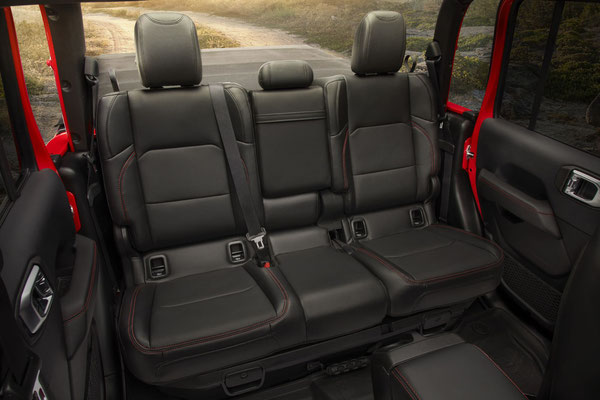 The 5-link front and rear suspension geometry has been designed to be more robust and performing. The springs have been calibrated for an optimal balance between driving on the road with or without load while maintaining the legendary off-road capabilities.

The Rubicon Gladiator version will be equipped with two-inch Fox dampers, side bars and 33"tires.

An approach angle of 43.6 degrees, breakover angle of 20.3 degrees, departure angle of 26 degrees with a ground clearance of 28 cm.

Mopar will offer more than 200 parts or accessories exclusively dedicated to the Gladiator. Mopar products will go from tuning accessories to those dedicated to loading, obviously passing through the lift kits.

A 118-inch wheelbase pickup that realized few product changes. It was Willys-Overland’s first attempt to diversify the Jeep brand from the CJ.

These Forward-Control series Jeep vehicles were essentially work trucks – with an 81-inch wheelbase for the FC-150 and 103.5 inches for the FC-170. They received few changes during their lifecycle, though some 1959 and 1960 models featured full-floating front and rear axles, and some FC-170 models included dual rear wheels and a four-speed manual transmission.

Introduced in 1981, the Scrambler was a Jeep similar to the CJ-7, but with a longer wheelbase. Known internationally as the CJ-8, it was available in either hard- or soft-top versions. Less than 30,000 Scramblers were built and are extremely popular among collectors today.

Based on the Cherokee platform and similarly equipped, the pickup received a six-foot bed in 1987. Later models offered Selec-Trac or Command-Trac four-wheel drive.