A Wrangler TJ with the Independent Front Suspension

Who said independent suspension isn't valid on off-road vehicles? The diatribe is still open and, perhaps, a definitive solution will never be reached. In the meantime, I propose this Wrangler TJ with IFS system made by the Spanish 4x4 Proyect.

Until a few years ago, the independent front suspension system was almost snubbed by hard and pure offroaders; it was considered a good only SUVs and pick ups. Apart from the speech of the  cross country vehicles, where, with the necessary modifications and reinforcements, the effectiveness and driving precision of the independent front arms is undeniable, the solid axles, for its performance and its excursion, has always been preferred by those who love to face the big obstacles.

Most likely, the Independent Front Suspension stood out and won for the first time the King of the Hammers in 2011 thanks to Shannon Campbell who led his IFS buggy to victory. From that date, many Ultra4 vehicles were equipped with this system which then spread widely in other disciplines and also in Europe.

The IFS that I am talking about, albeit in the similar concept, is technically very different from those produced as standard by the automotive manufacturers and offers greater advantages in terms of strength, driveability and excursion. I thought the Independent Front Suspension was just a matter of prototypes and instead, the Spanish 4x4 Proyect, based in Zaragoza, denied me with his beautiful Wrangler TJK, later I will explain the meaning of the K, which I found at the Iberian Camp Jeep a few years ago.

Miguel Garcia Pelayo is the deus ex machina of this company which in a few years has gone from being a generic dealer of 4x4 accessories to a consultant, designer and implementer of innovative solutions for both the civil, industrial and military sectors. Specialized in suspension and transmission parts, the 4x4 Proyect wanted to test itself with a Wrangler TJ with the aim of improving its mobility, driveability and front ground light.

Everything about this Wrangler TJK with IFS suspension

The end result of this TJK, with IFS system and 2.8 CRD engine from a JK (and here is why K is revealed), is awesome. After testing this TJK in offroad, I was positively surprised by the easiness with which I drove it, by the good mobility that thanks to the IFS allows to always have the four wheels on the ground and by the robustness of the system that was tested several times on a jump, with perfect landing thanks to the FOX shock absorbers and showed no signs of slowing down.

Under the hood there is a CRD 2.8 turbo diesel engine from a Wrangler JK with 193 horsepower and f 540Nm of torque. The custom made exhaust was made with 3.25 inch diameter pipes against the 2.25 of the originals. The gearbox is an NP231 with 2.72 ratio.

The bulk of the work of this preparation took place at the front. First of all, the front axle and all the related fixing plates to the frame have been completely dismantled to make space for the tubular cage, fixed to the side members and to the cross member, which houses the differential and to which the independent arms are fixed. The adapted differential is a Ford 8.8 with 100% ARB differential locker. Instead of the axle shafts we find custom made shafts that work with a maximum angle of 49 ° on the wheel side and 46 ° on the differential side.

Close-up on the triangles of the IFS which have a full 21 inches, i.e. 53 cm of excursion.

Front shock absorbers are Fox coilover and a 2.5” bypass

A Currie Antirock bar has also been installed.

The rear axle is a Currie Dana 60 with Detroit Locker. The brakes are 300 mm Currie and the double cardan drive shaft is custom made. The suspension geometry is a 4-link with aluminum arms. As at the front, here too there is a coilover coupled with 2.5" by-pass from Fox.

The steering system is hydraulically managed with the PSC system. 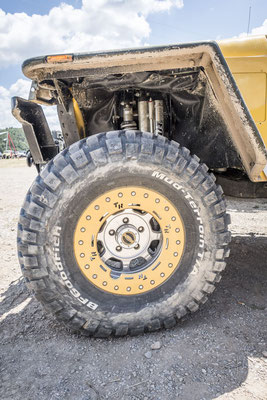 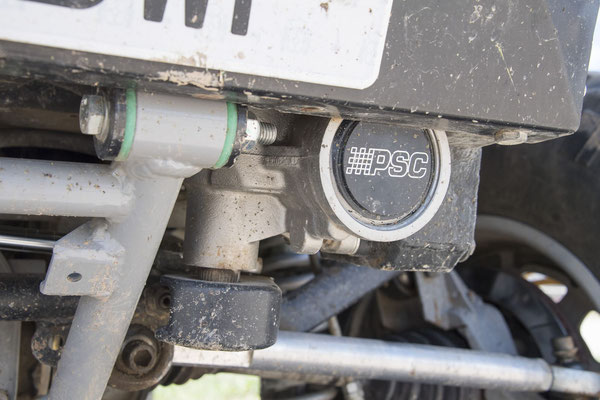 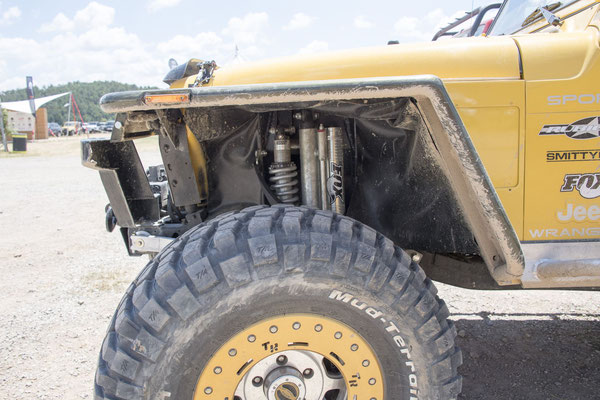 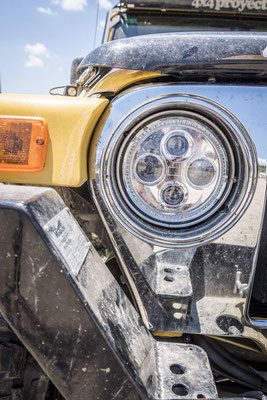 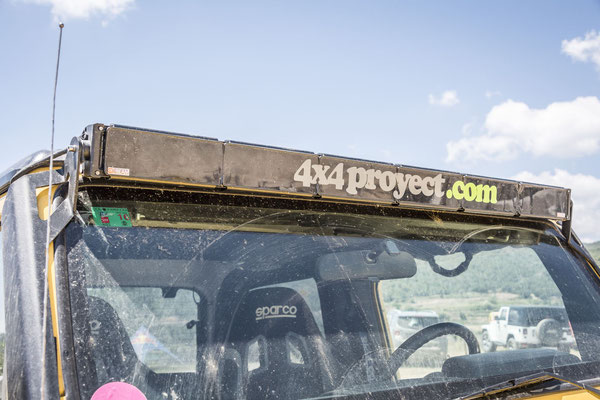 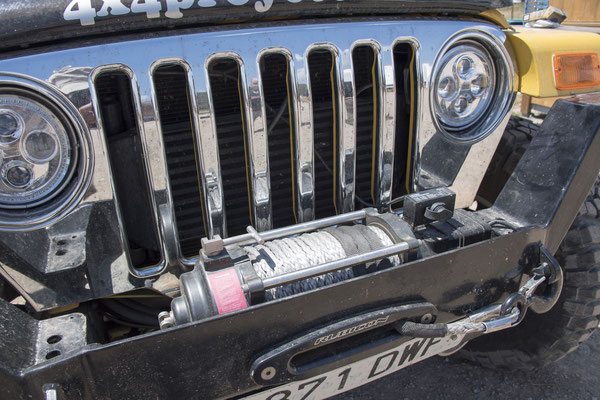 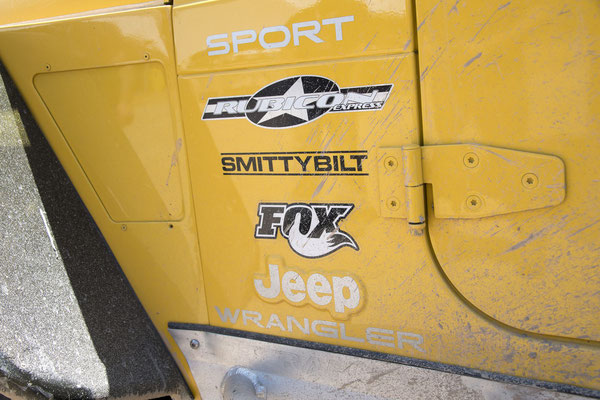 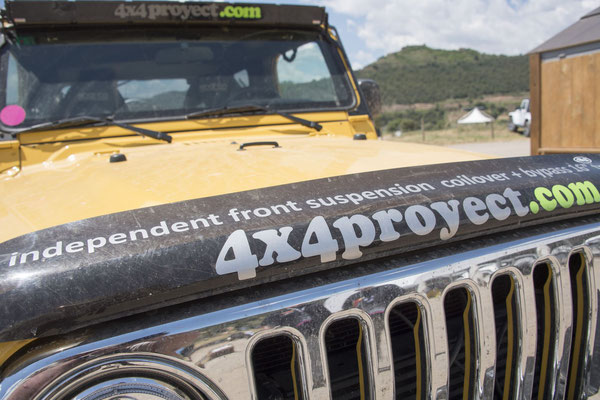 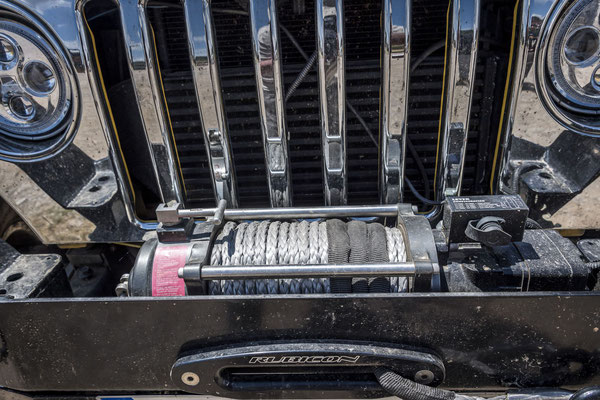 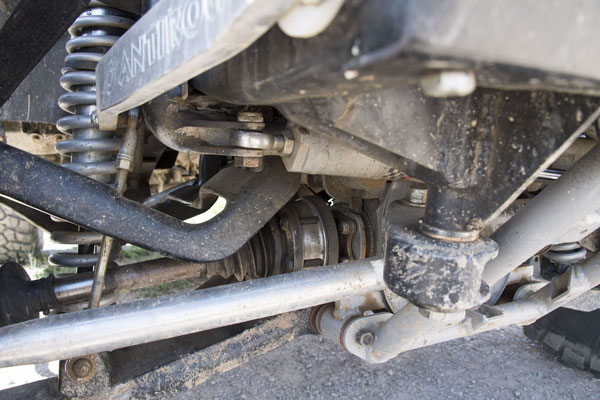 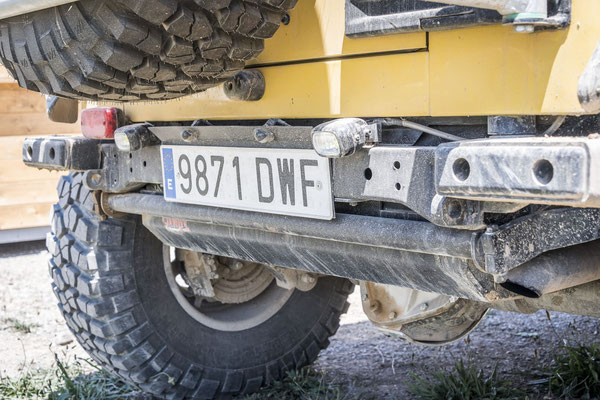 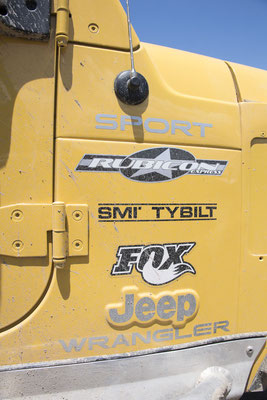 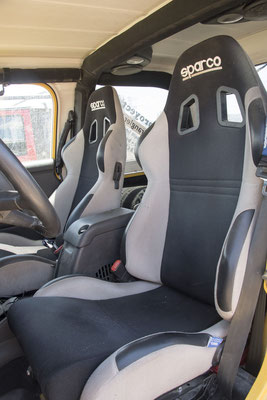 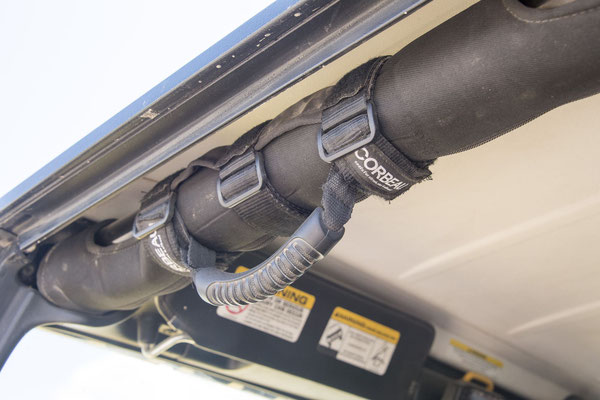