Trophy T, an Ultra4 rig dressed as a Daimond T

I will never stop being fascinated by American automotive creativity. Every time I visit California for King of the Hammers I discover exceptional vehicles. This time I want to describe the Trophy T built by Tim Odell of Vice Unlimited.

I can't deny it. I am in love with American automotive culture in general and off-road culture in particular. I am fascinated by the ability to modify cars in style and create real works of art. The American off-road world is no different and every time it amazes me with creations that leave me speechless. From super technological and performing vehicles to super cool ones, which take up aspects of the Stars and Stripes automotive history, every time is a pleasant discovery.

Hunting for unique vehicles in Hammertown

King of the Hammers is the perfect opportunity to research these vehicles. Every year, as soon as I arrive in Hammertown, the first thing I do is a walk among the teams' pits and through the camps of the spectators that from every corner of the United States finds itself in the Lakebed. Every year I find unique and fantastic vehicles. Companies and enthusiasts always have some vehicle that fascinates me. The Hill Camino, the Trophy Rat, the Galaxia de la Baja and the Race Tractor are an obvious example.

The beauty, and perhaps the most interesting thing, of discovering these vehicles is knowing their owners; fantastic people, helpful and with wonderful stories.

Also this year my search was not disappointed! I had the pleasure to admire and photograph Sam Collins' Ultra49Ford, Kenny Hauk's Wrecker and Tim Odell's Trophy T. In this article I really want to talk about this latest vehicle with the hope of conveying my emotions and that you too will be fascinated by it.

Trophy T, an Ultra4 vehicle dressed as a Daimond T

Keith Northrup's Trophy Rat, which I told you about last year, was the inspiration that prompted Tim Odell to build the Trophy T based on the body of a 1946 Diamond T 404. Tim Odell, owner of Vice Unlimited based in Lincolnton, North Carolina, has built its reputation by creating extremely unique vehicles.

"Vice Unlimited offers specialized and complete services that cover most aspects of a customized construction" - explains to me Tim Odell who continues - "I am always looking for how to overcome the limits of technical and artistic design and to collaborate with the leaders of the automotive innovation sector. ‘Unlimited’ means just that. "

With the Trophy T, Odell did just that. From a functional point of view the Trophy T is essentially an Ultra4 4400 racing vehicle while the aesthetic aspect is based on a 1946 Diamond T. Unlike the Trophy Rat, Tim Odell's construction is four driving wheels.

In addition to the high performance aspect, such as the 650 horsepower 364ci V8 LQ4 turbo engine, the super refined details are the most interesting technical aspect of the Trophy T. From the tubular frame TIG welded to the old style of the body, which recalls a Rat Rod, the Trophy T seems to go beyond any category classification of a traditional car. It is as much art as it is machine.

The Diamond T Motor Car Company was founded in Chicago in 1905 by C. A. Tilt. The company name was created by the father of Tilt, a footwear manufacturer, who created a logo with a large "T" (for Tilt) framed by a diamond, which wanted to express the concept of a high quality product. The mark on the hood of the vehicles was instead a sled dog with a harness. From its origins and for six years (1905 - 1911), the company dedicated itself to the production of touring cars and then directed its production exclusively to trucks. During World War I the Diamond T received an order for 1,500 Liberty Trucks, the standard truck model for the United States Army. During the Second World War, the Diamond T produced heavy trucks model 980/981 and the entire range of the 4-ton G509 6X6 series as well as some lighter trucks and even a tracked vehicle: the G7102. Diamond T was ranked 47th among U.S. companies for the value of military supply contracts during World War II. As for civilian vehicles, the Diamond T also produced pickups powered by the 6 cylinder engines of the QX Hercules series. White Motor Co. bought the Diamond T in 1958 and in 1967 the company merged with the Reo Motor Company to become Diamond Reo Trucks, Inc. During the 56 years of activity about 250,000 Diamond T trucks were produced.

Tim Odell spent most of the time of construction of the Trophy T to find the best solution to "marry" the tubular chassis, classic of an Ultra4 vehicle, with the body of the Daimond T of 1946, which would have characterized the whole construction,.

The 650 horsepower of the Trophy T are powered by a 364ci LQ4 V8 engine with ON3 Performance turbocharger, fixed in the rear of the vehicle. For the transmission, a 4L80e gearbox was used combined with an NP205 transfer case.

At the front, the suspension system is IFS with A-Arms custom made by Odell, with Fox 2.5” coilover and bypass shock absorbers. The Ford 9-inch center section that Odell hand built to the HMMWV (Hummer H1) geared boxes at the front wheel ends, there’s absolutely nothing usual about this setup. Part of the reasoning behind using this crazy high-clearance IFS design was simple- Odell had spare HMMWV parts and more time than cash to throw at the build. The differential lock is a Detroit Locker.

The rear axle is a 14 Bolt overturned in order to have more light from the ground. The perfect lubrication of the differential is guaranteed by a dedicated oil pump. The differential lock is a Detroit Locker.

The rear suspension system guarantees a great excursion and consists of two long lower links with an upper triangle. 2.5” Fox coilover and bypass have been installed as shock absorbers. The stability of the vehicle is guaranteed by a Currie Antirock anti-roll bar.

If externally the old style aspect of the Diamond T prevails, a look inside reveals the whole sporty soul of this Trophy T.

The details of this Trophy T are the real protagonists of the whole construction. 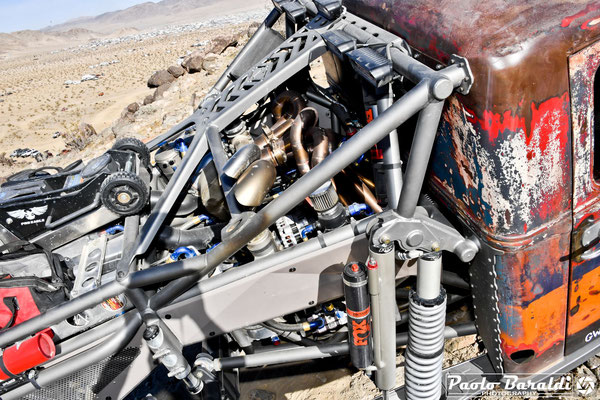 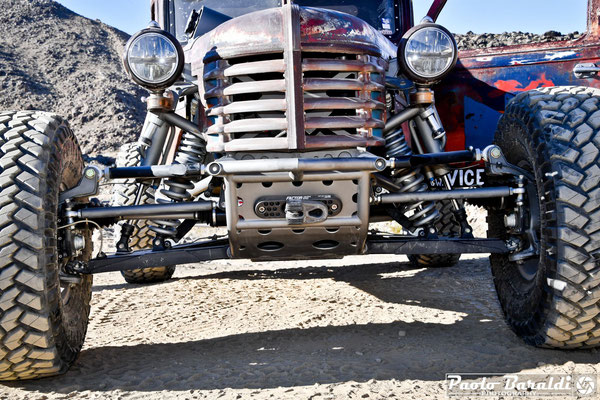 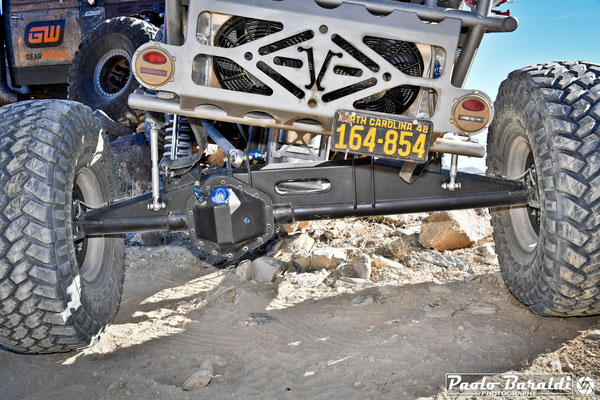 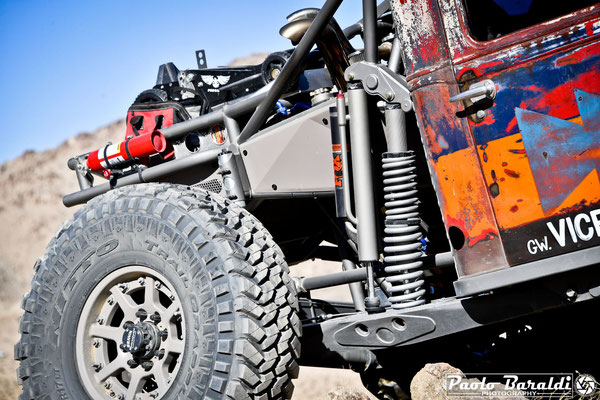 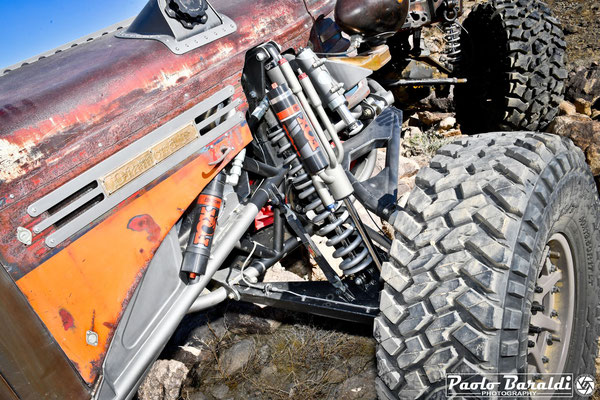 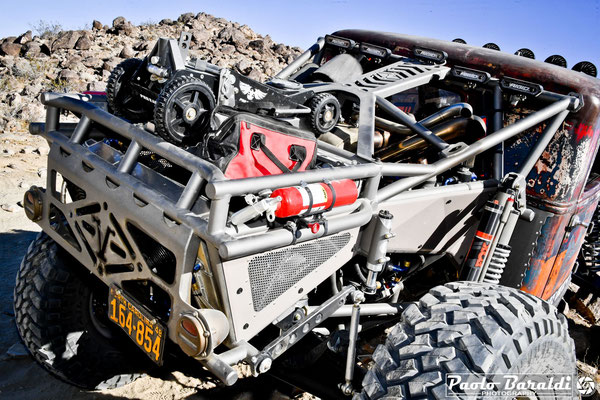 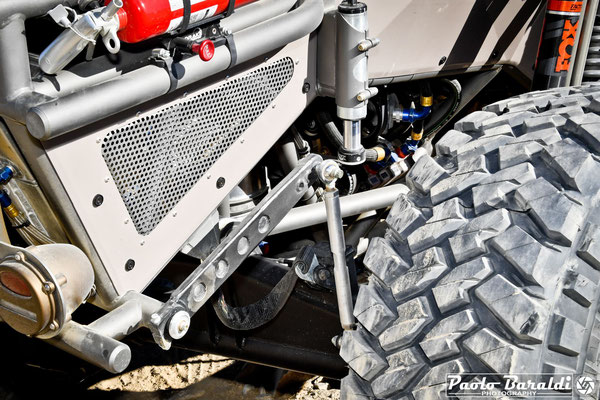 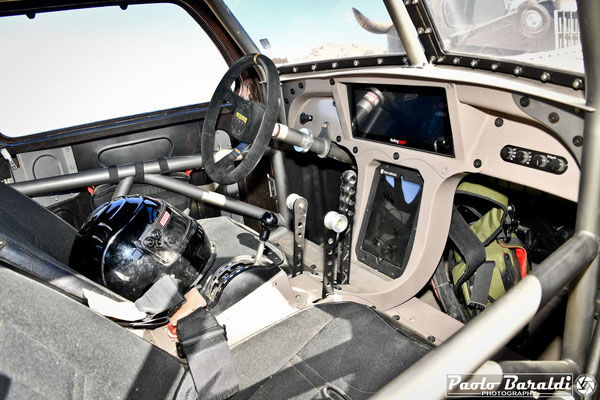 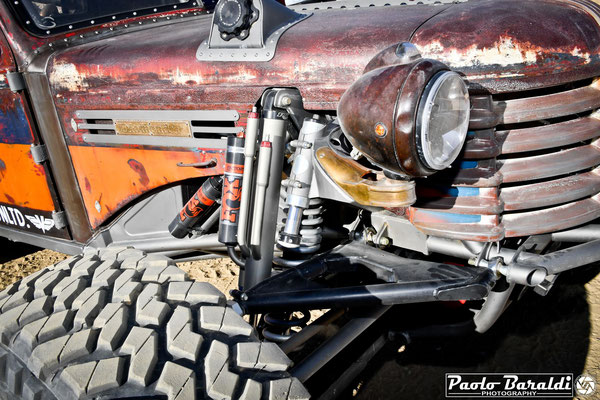 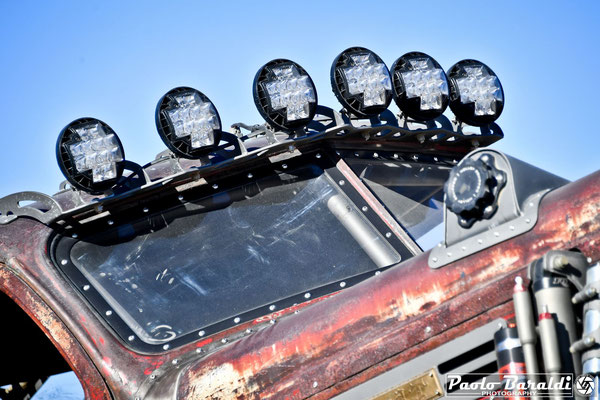 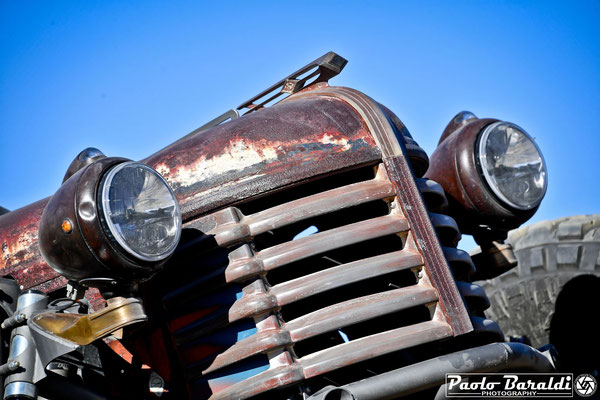 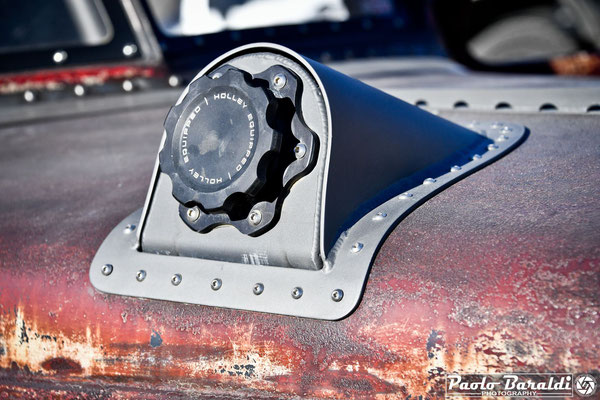